This picture is one of the most valuable and secretive object in our universe.

What has been discovered by this effort ?

On April 10, astronomers shared an image, now christened on Indian Twitter as a ‘giant meduvada in the sky,’ from the black hole at Messier 87 or M87. It was a blurred, yellowish orange frame surrounding a black centre. While this wasn’t vastly different from how astronomers and artists have visualised black holes for decades, it’s still great to see reality correspond to imagination. The black hole measures 40 billion km across — three million times the size of the earth — and is 55 million light years from earth. (A light year is about 9.46 trillion km). It is bigger than our entire solar system and a scientist described it to the BBC as “the heavyweight champion of black holes in the Universe.” The image has been analysed in six studies co-authored by 200 experts from 60-odd institutions and published on Wednesday in Astrophysical Journal Letters. Since the 1970s, astronomers have known that there are ‘super massive’ black holes (about a billion times heavier than the sun) in the Milky Way or galaxies close to it. While black holes themselves are invisible, the region around them — the luminous frenzy of charged particles from matter in their vicinity — is, in theory, ‘visible’. The bigger a black hole, the greater the odds of it having a massive event horizon — the fiery periphery of a black hole — and the better our chances of observing wisps of radiation from it. After the discovery of a super massive black hole in M87 (a ‘neighbouring’ galaxy about 55 million light years away) and one in our Milky Way, astronomers formed a network of ultra-sensitive telescopes — called the Event Horizon Telescope — to dedicatedly train their sights towards trying to capture some radiation from them and hopefully, snap a real picture from the black hole’s periphery.

Who taken this photo ?

Because black holes are the result, mostly, of heavy stars collapsing in on themselves, radiation emitted by particles within the disc are heated to billions of degrees as they swirl around the black hole at close to the speed of light, before vanishing into them.

The astronomers used a technique known as interferometry, which combines radiation from eight telescopes from around the world in a way that it appears as one single telescope capture. What this virtual telescope would capture were traces — electromagnetic radiation — from jets of particles spewed from the event horizons of the black hole. This faint radiation, in the form of mostly radio waves, would have travelled trillions of kilometres and for the telescope to observe them would be the equivalent of trying to snap a picture of an ant from the moon.

More about this photo.

By the time the following morning’s papers had landed, the hole was being framed to fit the usual formulas. The primary concern of the tabloid press appeared to be the question of whether the black hole was an imminent threat to us (or our house prices). Readers of that favourite cosmologists’ title, the Sun, were therefore asked the question of “whether you would survive falling into” a four-dimensional structure in which space and time lose their individuality and merge, as if it were an unguarded manhole. The general consensus was that you would not 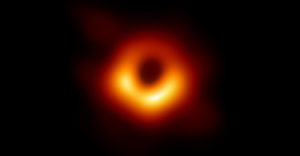 Meanwhile, the liberal media and their detractors had decided that the crucial thing about visual proof of a place of infinite density trapping light was an internet troll war about the gender of the prime mover in its discovery. The subject of that discussion, the American computer scientist Katie Bouman, who helped to create the algorithm that enabled the image, was at pains to argue that, honestly, the story was not really about her. But what did she know? By now, the black hole had been subsumed into that equally efficient obliterator of reality, the 24-hour news cycle.